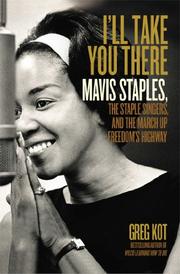 I'LL TAKE YOU THERE

Mavis Staples, the Staple Singers, and the March Up Freedom's Highway

A biography that will send readers back to the music of Mavis and the Staple Singers with deepened appreciation and a renewed spirit of discovery.

Chicago Tribune music critic Kot (Ripped: How the Wired Generation Revolutionized Music, 2009, etc.) mines one of that city’s greatest musical treasures, showing how the Staple Singers developed from one of the leading acts in gospel (when the voice of the preteen Mavis, “a pocket-sized dynamo,” was so husky that those who heard her on record thought she was a man), through their ascent to the top of the charts as pop/soul crossover sensations, and up to the career revival that Mavis Staples has recently enjoyed as a solo artist. As the title suggests, the book is more than a biography of Mavis, capturing the competitive, cutthroat nature of the gospel business, the pivotal influence of the civil rights movement and the complexities of patriarch Roebuck “Pops” Staples. He shaped the group’s sound, selected its repertoire and protected the family’s financial interests with a gun that unscrupulous promoters would learn to fear. His tremolo guitar and his family’s rural-style harmonies have exerted a profound influence on such rock heavyweights as The Band and Creedence Clearwater Revival. As the group moved its music from the church to the charts, it faced a backlash from the gospel community and ultimately saw Pops’ signature guitar supplanted in the studio by session musicians. The book is particularly revelatory on the transition that saw the Staple Singers recording in Muscle Shoals, sessions highlighted by the hit that gives the biography its title. Yet it ultimately treats the recent solo releases of Mavis Staples—produced by Wilco frontman Jeff Tweedy, the subject of an earlier book by Kot—almost as a tacked-on afterthought in comparison with the more thorough treatment given albums that made little impression upon release and have long been forgotten.

Through it all, the ebullience of Mavis Staples and her music shine through.