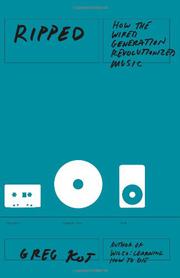 How the Wired Generation Revolutionized Music

Clear, concise and entertaining account of the tectonic shift in the recording industry over the past decade, thanks to technological innovations like the Internet, the MP3 and the iPod.

Music critic for the Chicago Tribune and co-host of NPR’s Sound Opinions, Kot (Wilco: Learning How to Die, 2004, etc.) begins by chronicling the rise and fall of the compact disc, introduced in 1983. It was the recording industry’s cash cow, forcing consumers to replace vinyl albums at exorbitant prices that bore little relation to costs. Beginning in the summer of 1999, however, Napster and other file-sharing applications gave fans the means to acquire music without paying for it. The resulting collapse of the CD market led the Recording Industry Association of America (RIAA) to launch a campaign to sue illegal downloaders—including 12-year-old girls and at least one single mother on welfare—ostensibly to recover lost copyright fees but also to intimidate consumers back into the music-buying habit. Alas, for the RIAA, the downloading genie was out of the bottle, and the music industry would never be the same. Despite the best efforts of corporations to consolidate control over the star-making machinery, Kot shows how increasingly sophisticated musicians and fans found ways to create new standards for assessing what is and is not a hit. Each chapter tells a story about key participants in this revolution, from Napster’s Shawn Fanning and Ryan Schreiber of the influential webzine Pitchfork to unlikely rock gods Death Cab for Cutie, Girl Talk and Arcade Fire. Some artists, like Metallica, who joined the RIAA in going after Napster-using fans, struggled and failed to come to terms with radical change. Others, like Prince and Radiohead, the heroes of this book, led full-frontal assaults in the music revolution, leaping ahead of the record companies—and reaping rich rewards for themselves—by offering fans free music and more choice in the packages they might be willing to pay for.

Indispensable for anyone who wants to understand popular music in the 21st century.