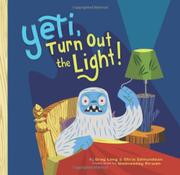 YETI, TURN OUT THE LIGHT!

When a yeti gets a case of the heebie-jeebies, then something clearly is amiss.

Readers meet Long and Edmundson’s Yeti, a yeti, as the day draws to a close. He heads to his cave, has some spaghetti and meatballs, flosses and hits the sack. But Yeti can’t sleep, as shadows lurk, “dart[ing] frightfully near! // They dance up the wall, / and, my, are they scary! / Oh, what could they be? / Yeti is wary....” Yeti flicks on the light. Three jewel-eyed bunnies stand there. The rabbits join Yeti in bed, off goes the light, and back come the shadows. This goes on as Yeti discovers a horde of his pals come to visit, until he shoos them to their respective beds and finally gets some shut-eye. This is a gentle and empathetic approach to the bedtime skitters, with a good and clear explanation for something that bedevils most kids when there is just enough light to conjure those creepy shadows. Kirwan’s artwork is not just luscious, but also smart and inviting in style, the matte colors effectively evoking scary shadows as well as laughably nonthreatening friends once the light is on.

A well-told tale of nighttime collywobbles, suitable for framing.