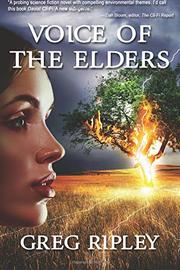 VOICE OF THE ELDERS

Indian-American teenager Rohini Haakonsen is in the United Nations headquarters in New York City as part of the Youth Assembly program, when a group of robed strangers appear—space aliens who assure the audience that they come in peace. They insist on being called the “Elders,” and they offer assistance to an Earth that’s in environmental peril, facing rising sea levels. They request that a number of young people be sent to the Elders’ unnamed world to study and learn their ways. Obviously, the sudden appearance of aliens at the U.N. is a shocking event, and not everyone trusts the Elders’ motives. Rohini, for instance, has suspicions about the whole affair, but she winds up being handpicked by the Elders (with approval from the president of the United States) to be one of Earth’s ambassadors. Rohini won’t go unprepared, however, as a government agent named Sinéad McGowan, alias “Jane Smith,” trains her for a few months before she’s scheduled to leave the planet, so that she can stand up to any sort of confrontation. But after an incident in Washington, D.C., leads to tragedy, Sinéad and Rohini flee to China to plan their next move, where more about the Elders is revealed. There, Rohini, along with the reader, also learns much about Chinese history and culture, including about the 13th-century painter Chen Rong and the dongtian fudi system of nature preserves. This information is, however, not always woven seamlessly into the story; for example, the narration heavy-handedly notes that Rohini “had found in the past that learning how people from other cultures viewed life often gave her deeper insight and more appreciation for her own.” There are some occasionally bland descriptions, and some of the obstacles that Rohini runs into along the way, such as conniving FBI Special Agent in Charge Edward R. Rooney, fizzle more quickly than they should. Still, the narrative takes readers to unusual places in a whirlwind of activity that’s difficult to predict.

A journey that’s uniquely informative, though hampered at times by overbearing prose.