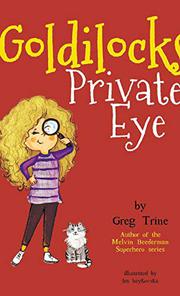 In this middle-grade chapter book, private detective Goldilocks takes the case of a man whose missing grandparents have been replaced by bears.

After her father dies, 10-year-old Goldilocks inherits the family business: a private detective agency, which she runs with her cat, Charlotte, in the town of Lick Skillet. Money is tight, the rent is overdue, and she must do her best to avoid the wild-haired Tom the Kid-Snatcher, who rounds up kids without parents for the local orphanage. (He even occasionally kidnaps children who aren’t orphans: “He was that kind of kid-snatcher.”) Goldilocks advertises her detecting services, and her first client is a man named Frank Sims who wants her to find his missing grandparents—and figure out why bears are now living in their house. She’s glad to take the case, but her client’s grandparents live in the nearby Black Forest, which is notoriously full of scary creatures, and she’ll have to pass near the orphanage, besides. In order to avoid some dangers, including Tom, Goldilocks leaves the safe forest path; luckily, she meets Patty, an orphanage escapee who lives in the forest. The girls become friends and partners, solving the mystery and alerting authorities to the orphans’ mistreatment. Trine (Willy Maykit in Space, 2015, etc.) skillfully mixes fairy tales and detective fiction with a coming-of-age story about braving danger to prove oneself. Such elements could easily become rather dark, and Trine does touch on serious issues (including Goldilocks’ money problems), but moments of humor help to lighten the story. For example, Tom’s horse-drawn jail, the Patty Wagon, is named after his most recent captive: “With any luck he’d soon change the name to the Goldie Wagon.” The girl-power message is also appealing. Baykovska (The Nasty Princess, 2018, etc.) provides lighthearted, cartoonish black-and-white pencil illustrations for each chapter head; these offer nice details, such as the fact that Tom bears some resemblance to Struwwelpeter, a character from a well-known 1845 children’s book.

A pleasing, well-judged blend of genres with a good resolution.