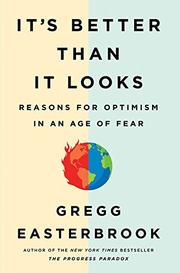 IT'S BETTER THAN IT LOOKS

Reasons for Optimism in an Age of Fear

Cheer up, world: we’re killing each other less, except in our cars, and living in a boom. Thus this contrarian pep talk by longtime Atlantic contributor Easterbrook (The Game’s Not Over: In Defense of Football, 2015, etc.).

Optimism is out of style, but by the author’s account, it shouldn’t be. When Donald Trump came into office, the unemployment rate was low enough that the number “would have caused economists of the 1970s to fall to their knees and kiss the ground.” Just so, crime is down almost everywhere, inflation is low, food cheap, fuel abundant despite dire warnings of peak resources. Even so, writes Easterbrook, Trump rose on a wave of warnings that America was going to hell in a handbasket, and he had a willing audience that accepted his dire admonitions without question. Why? Well, argues the author usefully, nations as well as people feel their age, and an aging society is naturally going to subscribe to the “declinist” view that things now are worse than when they were in its youth. One has only to go to an American city to see that things are vibrant, blessedly quiet compared to the clamor of a city in the developing nations, and blessedly pollution-free compared to other parts of the world. In his somewhat scattershot argument enumerating all the good things that are going on, though, Easterbrook sometimes inadvertently offers support for the gloomy view. For instance, while it may not be true that American jobs are being shipped off to China, it is true that in China, the same jobs no longer exist for humans because robots are doing them. That gloomy view is unhealthy, he suggests, especially in its Trumpian manifestations of white victimhood, which has little basis in reality but still channels those declinist feelings into widespread aggrievement.

Easterbrook’s assurances, however well-based, will ring hollow for many, but it’s an argument worth considering.