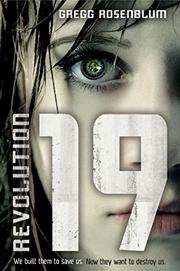 From the Revolution 19 series, volume 1

In 2051, the robot soldiers stopped fighting; the next day they took over the world.

Fourteen years later, free humans are scattered through the wilderness in Freeposts, where they live off the land, communicate via pigeon and try to avoid bot raiding parties. In the Cities, humans live under strict robot control. Just as the adults are discussing whether to move the Freepost, 17-year-old Nick’s home is attacked and destroyed. He and his 13-year-old, tech-loving brother Kevin and adopted 15-year-old sister Cass escape and head for the shelter their family set up in the north, hoping to find their parents there. After waiting there for several days, the trio decides to head to the nearest City in hopes of rescuing their parents. The City is vastly different from the stories they’ve heard all their lives, and when they meet Lexi, they find her ideas of the wilderness are just as different from reality. Even with Lexi’s help, can they survive in the City long enough to save their parents? Debut novelist Rosenblum’s series kickoff (movie already in the planning stages) is an exciting, dystopian page turner. Conceived by the minds behind the Final Destination movies and the TV series Homeland and 24, this is sure to have legs.