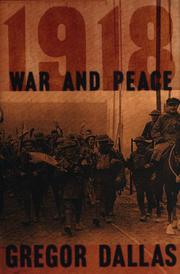 A sweeping, swirling history of the end of WWI and the ensuing struggle for peace—and of the inadvertent and ineluctable construction of the foundation of WWII.

Dallas (The Final Act: The Roads to Waterloo, 1997, etc.), born in London, educated at Berkeley, and now residing in France, is uniquely fit for this daunting task: He knows the languages, has explored the trenches, and has read the relevant published and archival documents. Consistent with his belief that history is local, he focuses on the geography of the north of western Europe, reminding us that “it is one large open plain. Europe’s history is constructed on that fact.” He begins his story as the war is ending. The US—despite its peculiar, disobliging insistence on keeping its forces independent—has finally arrived and, despite some initial failures, has provided the decisive boost in manpower and morale. Dallas crisply describes the military maneuvers that forced the German capitulation—and does not neglect the sanguinary details: “Horrors that would have been incredible to anyone before 1914 were the daily dose for soldiers on the front in 1918.” He deftly shifts venues—London, Paris, Berlin, Moscow, Washington—letting us know what is happening and sketching portraits of many of the principal players, pointing his finger to events of significance not just in the geopolitical struggle but in the smaller, human ones as well. Thus, we watch the young poet Wilfred Owen fall during the final days; we see Lincoln Steffens interview Lenin. Still, it’s the leaders whose stories grip us. Woodrow Wilson’s myopic insistence on placing his League of Nations at the top of the armistice agenda, Lloyd George’s physical agitation before he rose to speak, Clemenceau’s determination to remain at work after surviving an assassin’s bullet. And—most amazing—the Germans’ refusal to acknowledge that they had even lost the war.