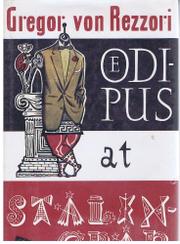 The first American edition of Rezzori's (The Orient Express, 1992, etc.) vicious satire of prewar Berlin originally published in Germany in 1954. Traugott von Jassilkowski is a young East Prussian who abandons his middle-class mother after his father dies, and heads to Berlin, determined to enter the privileged nobility. He goes about becoming royalty by dressing the part, eating at all the right places, and drinking at Charley's Bar, the main watering hole for young Berlin nobility. Jassilkowski also searches out the ideal lady of stature for marriage. He finds his ``blonde thoroughbred'' in the young daughter of a munitions manufacturer who is always in Charley's. She is a woman ``with a past,'' and Jassilkowski tries to reconcile memories of his pure, noble mother with the life of the lustful society girl. This all takes place between the summers of 1938 and 1939, the impending war looming throughout the book, although all of the protagonists view the war as just another chance to shore up their social standings. Writing during the bitterness of postwar reconstruction, Rezzori adopts a tone that is brutally condescending—not only toward his subjects but also to his readers. The book is packed with literary and philosophical quotes and is more of a nihilistic meditation on whether it is even worth it to write the present novel. Rezzori's writing is breathtakingly dense, although he frequently short-circuits himself by dismissing the story he is not really telling. The effect is a static, frustrating experience, sort of like watching a movie by an upper-class Fassbinder, but without the dark humor of Fassbinder himself. As Rezzori writes: ``Alas, I belong to that group Voltaire singled out as the only truly evil one: the bores!'' Although the novel is about prewar Germany, it will be interesting only to obsessive students of the postwar German psyche.