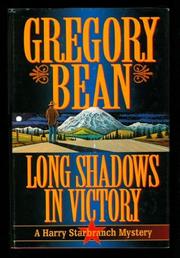 A second chapter in the turbulent life of Harry Starbranch (No Comfort in Victory, 1995), whose dead-end job as police chief in sleepy Victory, Wyoming, was to be a near-total respite from the rigors of policing in Denver. When scrawny loner and odd-job man Sonny Toms finds the skeleton of a pregnant woman in an old mine shaft, there are instant repercussions. The skeleton disappears, and Sonny is found dead in his trailer—tortured, his throat slashed. Harry must now contend with pompous, inept County Sheriff Anthony Baldi and the sudden appearance of old friend Ken Keegan, of the Wyoming Department of Criminal Investigation, who shows up with FBI agent Aaron Cohen in tow. They inform Harry of their suspicions that the right-wing Posse Comitatus is stockpiling weapons in Victory, possibly in cahoots with summer resident Wolfgang Bauer, a brewery mogul whose grandson Tad is presently occupying the estate, along with a bodyguard. Tad's recent, now ex, girlfriend Ellen Vaughn, an anthropology student, is briefly a suspect in Sonny's murder, but then Tad and bodyguard are found shot to death. Harry, helped by lone deputy Frankie Bull, takes the job of finding the killer as a personal challenge, barely escaping his own demise in the confrontations to come. Lots of profane and bloody action; lots of explicit sex, as Harry sheds girlfriends in yet another attempt to reconcile with ex-wife Nicole. The pace is slowed by rambling descriptions of Wyoming's scenic wonders, weather and road conditions, and a zillion high-caloric meals at Ginny Larsen's Country Kitchen. Still, the solid plot, warm, folksy style, and endearingly fallible Harry will engage most readers to the finish.