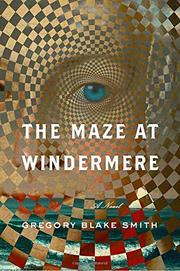 THE MAZE AT WINDERMERE

The maze of Smith’s (The Law of Miracles, 2011, etc.) title is a feature of a Gilded Age estate that appears in two of the five narratives wound together here, as do other links, like women named Alice, allusions to Henry James, opportunists, closeted gay characters, chess moves, and more. In 2011, we meet a tennis pro named Sandy who is riding on his muscular physique, pleasant personality, and a vintage motorcycle he won in a bet to keep himself going among the rich of Newport. Quickly his complications include sleeping with both a du Pont heiress and another member of her household at Windermere. In 1896, on the same spot, good looks and charm are also the stock in trade of one Franklin Drexel, a secretly gay man who is hoping to butter up a rich widow and score himself a propertied marriage. In 1863, a budding writer who turns out to be Henry James himself is dallying among a similar crowd, but his concealed purpose is not matrimony but rather material for his writing. In 1778, we follow the attempts of a British officer billeted at what is left of occupied Newport to get the attention of a 16-year-old “Jewess” he's obsessed with. Due to his repugnant anti-Semitism, he plans only to wrest her from her father’s protection, deflower her, and cast her aside. In 1692, Prudence Selwyn is just beginning to accept that her father’s ship is not coming back and that she and her little sister, Dorcas, are orphans. She’s 15, her only asset is a young female slave, and their options look very grim indeed. What seems overly complicated at first becomes quite compelling by the end, when the stories alternate in ever shorter flashes toward resolution—though, oddly, only one of them comes to what feels like a satisfying ending.

The changing language, landscape, and mores of three centuries of American history are depicted with verisimilitude, highlighting what doesn't change at all: the aspirations and crimes of the human heart.