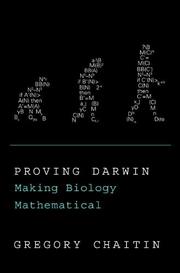 From a renowned mathematician, a collection of a series of lectures on “Metabiology: Life as Evolving Software”—a “philosophy and history of ideas course on how and why to approach biology mathematically.”

Chaitin (Meta Math! The Quest for Omega, 2005, etc.) equates DNA with a universal programming language, software that “can presumably express any possible algorithm, any set of instructions for building and running an organism.” He creates a model “toy” organism—pure DNA stripped of any cell parts or functioning metabolism—and studies how the organism evolves through mutations resulting from random walks in a huge software space. He makes the point that his model reflects the creativity and open-endedness of nature, in parallel with the incompleteness and open-endedness of mathematics itself, as Kurt Gödel proved. Throughout the text, Chaitin pays considerable homage to Gödel, Turing and von Neumann. The author’s model organisms do not stagnate but respond to the challenge of creating extremely large whole numbers by creating variations in the software (mutations) achieved by those random walks, mutations that are in fact algorithms, which translate to the organism’s increased fitness. Chaitin’s invocation of mutations that are whole programs rather than simple changes in a single letter of the DNA code is necessary for his proof, but it has the effect of taking the issue of natural selection out of biology and into pure mathematics. As such, questions are sure to abound, and the book is a bit esoteric for general readers. But credit the author for a lively style, lots of useful historical references and an appendix that includes von Neumann’s prescient essay on self-reproducing automata.

Provocative? Yes. The last word on evolution? No, but a stimulating one all the same.