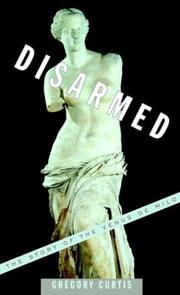 The Story of Venus de Milo

A brisk and brilliant trot through the history of one of the world’s most famous pieces of sculpture and through the lives of those who fashioned her, lost her, found her, claimed her, bought her, displayed and otherwise adored her.

In a stunning debut, Curtis, the former editor of Texas Monthly, has fashioned a highly readable, well-researched and even passionate account of the statue of the half-clad armless goddess. He first takes us to the Greek island of Melos, where, on a trek, he saw signs marking the general area where the Venus was found in 1820 by a farmer who was digging at a site located by a curious French sailor, Olivier Voutier. Thus began this grand adventure. After much dickering and blustering (but no celebrated fight on the beach, despite some claims), the French purchased the Venus from the locals, who thereby earned the wrath of the Ottoman Turks, who controlled the island. The French, annoyed at the British for blustering about their Elgin Marbles, now had their own treasure, which arrived at the Louvre in 1821. From the outset she was controversial. Who was she? Where had she stood? Was she part of a configuration of statues? What had her arms been doing? How should she be displayed? Conventional wisdom had it that she could not possibly have been created during the “cruder” Hellenistic period (but she was)—and the French, says Curtis, probably destroyed evidence that contradicted their prejudices. Curtis reveals things most people don’t know: she had earrings, bracelets, choker, tiara (all probably stolen); she was most likely painted (her hair golden, her lips red); she was decoration for a gymnasium—the world’s most luscious cheerleader. In his most riveting passages, Curtis summarizes previous theories about her, shows how they were inaccurate, and supplies his own (quite convincing) alternative. Illustrations show her from all sides, but, sadly, there is no drawing of her the way Curtis conceives her.