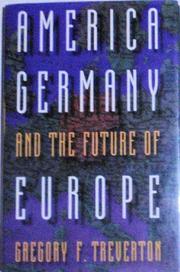 AMERICA, GERMANY, AND THE FUTURE OF EUROPE

Authoritative analysis of how to relate to the powerhouse that is Europe today, by Treverton (Senior Fellow/Council on Foreign Relations; Covert Action, 1987, etc.). To say that this is a timely book is vastly to understate the case: The sudden and unpredicted absence of the USSR as an international force has catapulted the newly united Germany, Treverton explains, into a position of power arguably greater than that which it occupied in 1939. The author begins his analysis by looking at Germany in the early 19th century, in 1871 (when the nation was first unified), and after WW I—all precedents of sorts, he finds, for today's Germany and its role in the current European configuration. Treverton points out, however, that, unlike post-WW I Germany, today's Germany is scarcely controllable. He places Germany in the context of US foreign policy, emphasizing the new importance in US-German relations of long-range economic factors and the state of the US economy rather than the military- solutionist thinking of the cold war. He does envision a vital continuing role for NATO, however, although he has no trouble imagining the specter of a US devoid of the economic power that was once the basis for a worldwide respect extending beyond the military. Treverton is a hands-on thinker, expert in the history of all the myriad governmental groups involved in European policy, but weighty asides vitiate his message: ``Perhaps a future historian will be impressed by the American military engagement in Europe as a half-century interlude, not as an enduring change....'' Still, a sound—if guarded and dense—call to reason about the new balance in US-European relations.