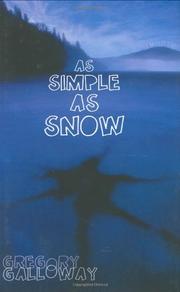 AS SIMPLE AS SNOW

Engagingly written debut about a mysterious teenage girl’s disappearance, and more’s the pity: if Galloway were less sure and fluent, readers would be less likely to jump through his hoops before realizing he didn’t know why they were doing it, either.

Anastasia (Anna) Cayne transfers to Hamilton High and hangs out with the Goths, but the story’s unnamed narrator-boyfriend (an angsty teenager down on hypocrisy, we’ll call him Holden for convenience) discovers that the only resemblance between the Goths and Anna is the black mascara they both wear. Anna is accessorized with—if not completely composed of—a full set of cool outsider cultural tics. She spends her time writing fanciful obituaries for everyone in town; she introduces boyfriend Holden to Houdini, Poe, Rimbaud, Lovecraft, and Ambrose Bierce; plays him indie-rock music and shortwave broadcasts of mysterious counting voices; sends him messages in code, mysterious phrases, puzzles, and maps. Much remains unexplained about her even as she makes The Spooky and Unexplained part of Holden’s life. Where did her bruises come from? Why doesn’t her father have eyebrows? What was Anna’s involvement in the car crash of loutish alpha Goth, Bryce? Why doesn’t she like Mr. Devon, Holden’s favorite teacher? When Anna disappears, her dress neatly laid out beside a hole in an ice-covered river, even more questions arise. Why was there a condom wrapper under Anna’s couch, when Holden knew he’d disposed of his? Is Anna dead? Is she sending him messages, or is that just wishful thinking? Are the messages from the other side, or just from another town? Where did Holden’s drug-dealing best friend go for two weeks? Why did Mr. Devon lie about where he’s moving? Did the TV psychic really contact Anna? Who knows? And who cares? Like the puzzles and codes Anna sends, the questions either go unresolved, or if answered, lead nowhere.

A pointless exercise that might work for the “I challenge you with my shocking style” YA crowd.