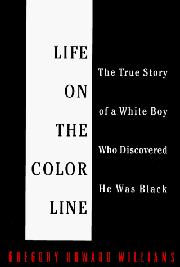 LIFE ON THE COLOR LINE

This memoir of a boy's struggle with a conflicted racial identity too often remains on the emotional surface of its loaded topic. Williams (dean, College of Law/Ohio State Univ.) believed that he was white for the first ten years of his life in 1950s Virginia. Then, when his parents separated, his mother, Lois, went to Washington, D.C., while his father brought him and his brother, Mike, back to his own hometown of Muncie, Ind. There the boys learned that their father, the alcoholic and often unemployable James ``Buster'' Williams, was in fact a light-skinned black man who had, for most of his adult life, chosen to cope with a racism and segregation by ``passing'' as an Italian-American, even calling himself ``Tony.'' Gregory and his brother grew up on the black side of town among their father's relatives. Meanwhile Lois Williams never came to see her two ``colored'' sons, although it later turned out that she had visited her parents in Muncie many times throughout Gregory's adolescence. Though black kids frequently taunted and threatened Gregory for looking white, his light skin bought him few privileges in the white world. After school officials found out that he lived among black people, he had to fight to maintain his position as first-string quarterback, and as he got older, he received warnings not to date white girls. The book promises an intimate view of biracial experience, but Williams often loses his story in well-worn rags-to-riches clichÇs (``Muncie...has lived inside me forever''), and his language is often stilted and formal, which distances both him and his readers from the complex emotions suggested by the story. More frustrating still, events that involve people who are still alive are left unexamined—his eventual marriage, for instance, to a white woman who at one point ended their relationship under pressure from her family. Williams's memoir does illuminate some complexities of the biracial experience, though its reserve keeps other questions in the dark.