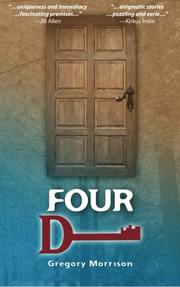 Morrison’s characters, often nameless and adrift in undefined settings without social referents, are the playthings of spectral entities that ensnare them in Kafka-esque conundrums. The anonymous protagonist of “Space” notices that people, objects and buildings have suddenly started disappearing and feels that “I myself am probably nobody anymore.” He’s not unhappy with the prospect, until the strange power behind the disappearances starts manipulating his relationships with his lover and best friend. In “Four Rooms,” a woman with multiple personality disorder awakens to find herself imprisoned in a labyrinth of rooms, and her search for a way out forces her to confront her devastating divorce and the bickering voices in her head. In “Guest,” an unnamed man in an unfamiliar city invites a beautiful woman into his hotel room; she seems to embody the bounty of nature—or the even greater promise of death. The collection’s most conventional tale, “The Principle of Luidgi,” features a callow young man who works hard to accumulate a satisfying job, good friends and a fiancée—only to decide that everything bores him, so he lets loose with a spree of sexual vandalism. Morrison’s storytelling has a dreamlike quality as it glides past logical non sequiturs and resonant symbolism—“She immediately opened her mouth broadly, and I saw her pull a pair out of it…‘See, I can bear fruit too’ ”—with deadpan equanimity. The foggy narratives and cryptic dialogue make the stories as puzzling and eerie—and sometimes as tedious—as dreams can be. Still, Morrison’s poetic imagery (“[b]ig, brown sweet cherries started to fall out of her dark eyes”) and off-kilter japes (“he was going to drop by the market to get some tomatoes…he’d buy them, put them in the kitchen and start hypnotizing them to make them talk”) give his surrealist prose considerable charm.