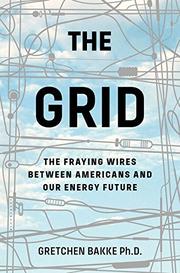 The Fraying Wires Between Americans and Our Energy Future

A primer on the challenges facing a power industry in transition.

Electricity is like no other commodity. Because there is still no way to store it on a large scale, the electricity we draw from the grid must be produced at that very moment. Production was easy to control when all electricity came from large plants burning fossil or nuclear fuel, but the rise of renewable energy sources has thrown these arrangements into chaos since renewables provide "an inconsistent, unpredictable, variable power that nothing on our grid is prepared to adapt to, the grid itself least of all." In her debut, Bakke (Anthropology/McGill Univ.) describes the grid as far more than towers and wires. It is "a machine, an infrastructure, a cultural artifact, a set of business practices, and an ecology," the result of a Progressive-era combination of business incentives and government regulation, designed for the exact opposite of 21st-century needs. The author keeps the physics and tech talk to the minimum necessary as she leads readers through a history of the grid and a maze of financial, legal, regulatory, and environmental considerations with sprightly good humor. Bakke's analysis is confident and evenhanded; she delivers harsh judgments equally on myopic utility companies, uncomprehending legislators and regulators, and simplistic advocates of renewable energy production for poor planning, lack of vision, and failure to anticipate the consequences of their actions. She covers the causes of blackouts—most often trees and squirrels—and suggests that rather than hardening the grid, we need greater incorporation of microgrids to make it less susceptible to damage and minimize the impact on consumers when disasters happen. Finally, Bakke sketches a possible design of the "intelligent grid" of the future that uses widely distributed, small-scale generation and storage options to provide resilient and reliable sources of power.

A lively analysis of the challenges renewables present to the production and distribution of electricity.