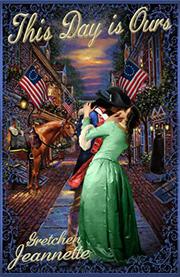 THIS DAY IS OURS

A love story set in Philadelphia during the American Revolution explores an unlikely pairing between an aristocratic woman with loyalist attachments and an unrefined rebel agitator.

In 1776, Philadelphia is a tinderbox of contentious political division—the city is torn between those who reaffirm their loyalty to the British crown and those who angrily demand political independence from it. And besides the tension created by the gathering clouds of war, the city is terrorized by a bandit known as Jack Flash who only targets wealthy loyalists and who is seen by the poor as a “hero.” One night, Jack Flash purloins a diamond- and sapphire-studded necklace from Alexandra Pennington, a recently widowed loyalist of exquisite elegance and beauty, a bold move that puts pressure on an otherwise feckless Sheriff Owen DeWalt to bring the culprit to justice. Meanwhile, Alexandra makes the acquaintance of Dalton Jameson, an “uneducated and humbly born” horse breeder who nevertheless impresses her with his “sincerity” and “gallantry.” Dalton is also an enthusiastic advocate of independence, and so despite their obvious admiration for each other, a remarkably implausible romantic coupling ensues, though Jeannette (A Devil of a Time, 2014, etc.) skillfully renders the possibility believable. But Charles Villard, a sophisticated descendant of British nobility, has eager designs on Alexandra as well and loathes the closeness that forms between her and Dalton so much that he’s willing to ruin his reputation: “ ‘Listen, you side-slip of a whoremonger. I’ve never liked you, and I especially dislike having you near things that belong to me. I’ll say this but once,’ he hissed. ‘Leave what’s mine alone, or you’ll have hell to pay.’ ” Jeannette not only manages to make the affections between Alexandra and Dalton credible—that in itself is no mean authorial feat—but also develops both characters with great depth and sensitivity. While an ocean of difference divides their lives, they do share something important: painful personal histories of adversity. Dalton was compelled to leave England after a romance went wrong, and Alexandra was forced into a marriage of convenience after her father left the family in financial ruin. The plot itself is fairly formulaic—an uncommon love swims against the currents of convention. But the backdrop of the Revolutionary War adds a fresh twist; the author’s portrayal of the political contentions that cleave Philadelphia is historically rigorous and dramatically gripping. Unfortunately, the tale as a whole unfolds at a glacial pace—it’s simply not necessary that this novel is nearly 500 pages. In addition, readers will confidently guess Jack Flash’s identity from the work’s very beginning. Still, while Jeannette’s prose doesn’t reach any poetical heights, she does achieve a linguistic authenticity for the period that helpfully contributes to a full immersion in the engaging story.

A familiar plot refreshingly enhanced by its setting during the Revolutionary War, which is depicted realistically and with great intelligence.