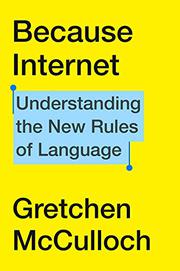 Understanding the New Rules of Language

The linguistics of informal (unedited) writing on the internet.

“The internet and mobile devices have brought us an explosion of writing by normal people,” writes McCulloch, a Wired columnist and co-creator of the linguistics-focused podcast Lingthusiasm. In this provocative debut, the author celebrates the internet’s “vast sea of unedited, unfiltered words,” which constitute “a new genre, informal writing.” Online life, she writes, “has become real life.” People using social media should be considered “published writers.” In conversational prose, she traces the “hidden patterns of written internet language” and how they are changing the way we communicate. She argues that new acronyms (btw, omg, lol), visuals (emoji), animated loops (gifs), emoticons (^-^), and other innovations are making language more efficient and playful. In its “purest form,” this new “public, informal, unselfconscious language” can be found in chat rooms. McCulloch’s wide-ranging text covers the history (so far) of internet culture, the sociology of users, and the diverse ways in which the internet has shaped our daily online social life. In many instances, the author simply confirms what internet users know: how distinct internet cohorts developed, depending on whether they began socializing online in forums, on blogs, or with Facebook or Instagram; and how older people were slower to engage with the internet and social media. McCulloch reminds us that the frequent texting of teenagers is no different than a previous generation’s time spent at malls, “hanging out, flirting, and jockeying for status with their peers.” She also salutes unsung heroes of online language innovation: the Canadian Wayne Pearson, who probably coined “lol” in a 1980s chat room; the Japanese, who first used the pile of feces and other emojis; and biologist Richards Dawkins, who in 1976 coined the word “meme.”

Purists will flinch at many of McCulloch’s claims for how informal online writing has benefited our language and society while internet nerds will relish her informative book.