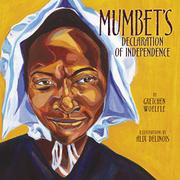 With the words of Massachusetts colonial rebels ringing in her ears, a slave determines to win her freedom.

In 1780, Mumbet heard the words of the new Massachusetts constitution, including its declaration of freedom and equality. With the help of a young lawyer, she went to court and the following year, won her freedom, becoming Elizabeth Freeman. Slavery was declared illegal and subsequently outlawed in the state. Woelfle writes with fervor as she describes Mumbet’s life in the household of John Ashley, a rich landowner and businessman who hosted protest meetings against British taxation. His wife was abrasive and abusive, striking out with a coal shovel at a young girl, possibly Mumbet’s daughter. Mumbet deflected the blow and regarded the wound as “her badge of bravery.” Ironically, the lawyer who took her case, Theodore Sedgwick, had attended John Ashley’s meetings. Delinois’ full-bleed paintings are heroic in scale, richly textured and vibrant. Typography becomes part of the page design as the font increases when the text mentions freedom. Another slave in the Ashley household was named in the court case, but Woelfle, keeping her young audience in mind, keeps it simple, wisely focusing on Mumbet.

A life devoted to freedom and dignity, worthy of praise and remembrance.