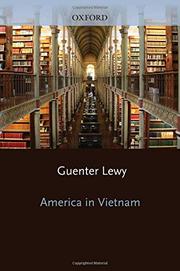 So far, the best and most illuminating writing on Vietnam has been the work of journalists like Herr, Emerson, Schell, and, in an earlier phase, Fall and Lacouture--they are the biographers of the war. Inevitably, as time passes, scholars will step in with their file cards and begin the autopsy. Lewy, a University of Massachusetts political scientist, aspires to the cold objectivity of a coroner's inquest. The first half of his book is a chronological history of U.S. involvement, interwoven with an analysis of the various strategic options employed or rejected. Highly critical of the ""big war"" strategy, he argues that the U.S. never really understood the nature of insurgent warfare (though, as he does not bring out, those who thought they did and pursued ""pacification"" fared no better). The villain of this section is Gen. Westmoreland, who epitomizes the offensive overkill mentality of the American military. If Lewy's objectivity sags a bit here, it collapses in the second half, which is an assessment of various controversial aspects of U.S. actions, such as the alleged illegality of American involvement, charges of genocide, war crimes, etc. Here Lewy emerges as a resolute defender of the morality of the war, and he has the Pentagon's facts to prove it. Though Westmoreland again surfaces as a scapegoat--charged with responsibility for not knowing about crimes committed under his command--the collective bÃªte noire here comprises the media and intellectuals who levied these charges. Using the military's own statistics--on courts-martial, deserters and AWOLs, etc.--Lewy shows that guilty individuals were punished, that breakdown in discipline was little more than normal (and in any case not due to anti-war sentiment), and that, after all, the North Vietnamese were the really brutal ones. Dealing critically with Vietnam will be a formidable challenge to scholars who choose to confront it, but this book employs diversionary tactics.