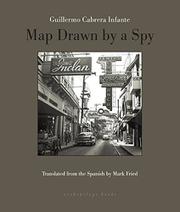 MAP DRAWN BY A SPY

A geography of disillusionment as limned by the noted Cuban writer (Guilty of Dancing the Chachachá, 2001, etc.), once a stalwart of the Fidelista revolution.

The men and women who trudged out of the mountains and into Havana 60-odd years ago were a tough, committed lot. Their civilian successors were just as tough; even when behind the compound walls, writes Cabrera Infante, Cuba’s ambassador to Belgium carried a heavy pistol, while his first secretary “had already killed an exiled Cuban in Santo Domingo.” Stationed in Brussels as a cultural attaché in the mid-1960s, Cabrera Infante traveled to Barcelona to collect a literary award, his movements chronicled at the order of a one-time aristocrat who, now a Fidelista, “did no work at the embassy, who never worked at all, since he had no skills or knowledge of anything.” It was a silly inquiry, since, Cabrera Infante writes, the lives of every junior officer in the embassy were transparent, and all were true believers in the cause of Cuban communism. As time wore on, Cabrera Infante’s commitment to that cause withered, for one thing because a certain moralizing conservatism crept in, such that homosexuals were persecuted and an editor friend of his was removed from his post for having invited Allen Ginsberg to Cuba, who then “scandalized the leaders of the Revolution by crowing in public that he wanted to go to bed with Che Guevara!” When he returned to Cuba and found that children could no longer have cake at their birthday parties and that domestic scotch tasted “like disinfectant,” the bloom was most definitely off the red rose. Cabrera Infante’s tone is quiet and melancholic, especially when, comparing notes with other writers such as Alejo Carpentier, he reaches a profound conclusion: “Just because the Revolution took writers in (and over) did not mean that literature wasn’t a dangerous frivolity.”

An exile’s plainspoken testimonial, bookending Orwell’s Homage to Catalonia in the literature of political disappointment.