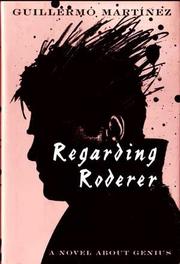 A stiff, predictable treatment of a subject that's anything but. Argentine Mart°nez's debut novel tells the story of two high- school friends, the unnamed narrator and Gustavo Roderer. The tale poses the boys as symbols of two types of intelligence: one that absorbs information, assimilates, and finds its place in the world; another that examines even the most basic assumptions about reality, neither fully accepting them nor finding acceptance. The novel consists of the clever, well-adjusted narrator's protracted gaze, at once admiring, envious, and disgusted, at the brilliant, brooding Roderer. This is a rather too neat, reductive way of depicting a relationship—as well as something as difficult to define as intelligence—and Mart°nez's chief failure is that he never really breaks free of the dialectic he sets up. The author gives the impression of scrupulously keeping his distance from his subject, as if to maintain his overdrawn distinctions. Even the book's title suggests remove. At one point in this novel of too many dialogues and too few conversations, Roderer theorizes on fiction writing: ``To move from the chaotic infinity, riddled with only partially coherent facts and relationships, that is before him, to the finiteness of a book, the writer can keep only a few elements. He must arrange them in the best possible way to create the illusion....But in the mistakes, through the cracks, one can sometimes glimpse the true abyss, the original vision.'' Masculine pronouns aside, that's an illuminating insight Mart°nez does not live up to: His novel abounds in skillful artifice, but the reader yearns for the ``mistakes''—the spontaneous, inconsistent leaps, twirls, and spills any narrative must make if it is to surprise and expand itself and its reader. Here, however, the narrative and the reader trot along toward a conclusion both can envision too early and too clearly.