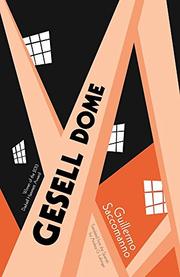 “He was swollen, deformed, nibbled by fish.” And that’s one of the luckier residents of Argentine novelist Saccomanno’s infernal seaside-resort city, where not much good ever happens.

A Gesell dome is a one-way mirror that allows researchers to observe subjects without their being aware of it. So it is with this omnisciently noirish novel, which allows readers to hover over Villa Gesell in the off-season and see the odd doings of the year-round inhabitants. The resort (an actual place), the translator tells us in a helpful introduction, was named after another Gesell, the descendant of German immigrants, but no matter: all kinds of people end up in the beach town for the same sorts of exigencies and accidental reasons as the Europeans who have landed on the Rio de la Plata for the past half-millennium, among them an escapee from the military terror of the 1970s whose daughter, after affairs with drug dealers and sessions in rehab, pleads for her own daughter to find a place in the relative safety of Villa Gesell. “Trabuco kept a jealous eye on her,” the narrator tells us, making revelations in fits and starts, “told her that a sinner never gets rid of the vice in her soul and that the Lord must have had some reason for infecting her, because let’s not forget that Vicky has AIDS.” Vicky isn’t the only denizen of the city who’s sick, and everyone seems altogether grumpy, perhaps because, under the orderly surface, the whole place is tainted with graft, corruption, and nepotism, all of which run through the city like the sewer line that, the narrator assures us, will never be built, “streets and boulevards gutted with no signs of a single pipe.” Moving from character to character, Saccomanno writes with dark lyricism of the shady dealmakers, old-school Nazis, youngsters “with their hormones raging,” prostitutes, and other types whom you might expect to find in a grim place and a grim time.

Cynical and funny: a yarn worthy of a place alongside Cortázar and Donoso.