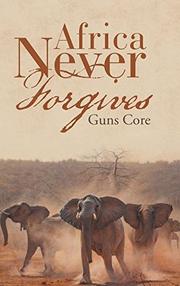 Anthropomorphic animals and humans compete to survive in the unforgiving African wilderness in this visceral debut novel by Core.

Disa is in a position perilous to most elephants—heavily pregnant and separated from the herd. Rufu is a battle-scarred lion who watches her greedily. He lies in the long grass, talking with Temba, an old baboon, about his desire to feast on the sweet meat of the newborn elephant. Disa’s strength makes this far from an easy kill for Rufu. After the baby is born, Rufu immediately attacks it, but Disa’s sister, Bhasa, deals the old lion a bone-crushing blow. Nearby, Alan teaches his fiancee, Rosy, how to protect herself in the wild. He has recently returned from World War II and is suffering from PTSD. He urges Rosy to take a “frontal brain shot” on an elephant protecting what appears to be a dead calf. Rosy refuses, believing the calf to be alive, but now the hyenas move in. What will become of Disa and her faltering calf, Benyu? How will Alan and Rosy feature in this perpetual struggle between predator and prey? The author’s ability to lend believable voices to the various animal packs drives this thrilling narrative. Bwoni, the dominant female hyena, is suitably bloodthirsty: “Rufu has softened up a baby elephant for us. It lies in the middle of this herd, but if these cows keep it in the center we will not be able to get to its juicy flesh.” The book’s cringe-inducing sex scenes between Alan and Rosy (“I want you to make love to me like you use to, like you mean it, like you did before the war. I want it long, hard and furious”) don’t fully detract from an imaginatively conceived novel that places the reader dead in the center of a bloody fight for survival. Black-and-white illustrations are included.

Gory and carnal with some clever, bold strokes.