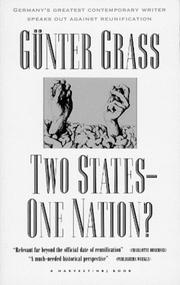 A quixotic collection of speeches and essays that bewails the current trend toward reunification of the two Germanys. The renowned German novelist reveals himself here as a poltical iconoclast aware that he is flouting conventional political wisdom. His argument against German reunification rests on the tragic precedents of this century. Grass contends, rightly, that a unified Germany has meant nothing but trouble in the 20th century, and argues from this that reunification would ultimately unleash powerful destructive forces that might once again engulf Europe in war. Grass fears both the economic and the military strength of Germany, and seems to feel that, even in an integrated Europe, Germany's vast economic strength would be a force for evil He argues that Germans should broaden their thinking to regard themselves as one nation, but constituting two states; then he proposes this conception of "cultural" nationhood as a partial solution for the problems of other fractured nations, such as Ireland and Korea. But Grass' argument, though interesting, does not take into consideration the fact that, with the collapse of Communism, East Germany no longer has a convincing economic raison d'etre, and that political reunification appears to have broad acceptance on both sides of the border. Grass' fear that German reunification will necessarily lead to another world war, while understandable, defies historical precedent: Switzerland was once one of Europe's most warlike countries. In any event, Grass' conscience-driven arguments are more than likely to fall away into irrelevance.