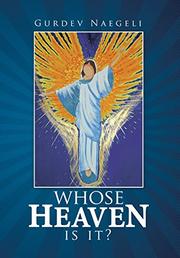 WHOSE HEAVEN IS IT?

A broadly scoped synthesis of spirituality in the modern, multicultural world.

In his complex, wide-ranging multidenominational treatise, Naegeli says mankind might now be on “the evolutionary threshold of a new leap in spiritual consciousness.” His book undertakes a clearheaded examination of the world’s major organized religions, from the great monotheisms of Christianity, Judaism and Islam to Eastern religions such as Taoism and Buddhism. Naegeli lays out the basic tenets of these religions and seeks to find the common strands binding their inner spiritualties, asserting that a “Spiritual Platform” is needed to ground humanity through the trials of modern life. He insists that mankind is in need of “proper moral guidance” because “we are witnessing a moral decline in Western democratic societies”; worryingly, he continues, this moral decline is in part due to the fact that “the basic fabric of common ethical values is not the cornerstone of our economic and political system.” Throughout the book, his knowledge is deep, though he’s stronger on some subjects than others. The book’s representations of science, for instance, are questionable at best, from his claim that humans evolved from chimpanzees to the statement that matter and antimatter combined to create light. He writes that the more we see of the complexity and beauty of life, the more “plausible” it is that there’s a Creator, yet his depictions of the world’s various religions, though pleasingly detailed, can be uneven as well, especially when it comes to Islam, among whose “guiding moral principles” he finds puzzling notions such as “hate against other cultures/religions is prohibited” and “terrifying members of society is not accepted,” without offering scriptural citations. Nevertheless, the larger currents of Naegeli’s analysis compensate amply for such questionable bits, as does his search for spiritual common ground—his Spiritual Platform—for modern societies he sees as having unhinged from shared moral underpinnings.

Despite a few odd turns, a refreshingly comprehensive inquiry into the hearts of humanity’s major faiths.