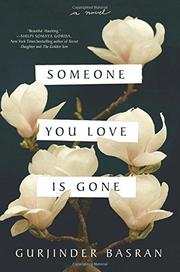 SOMEONE YOU LOVE IS GONE

A woman struggles to come to terms with the death of her mother.

Basran’s (Everything Was Goodbye, 2010) second novel takes the reader on an intergenerational journey through a family’s history of loss. Centered primarily on Simran, the oldest daughter of an Indian family living in Canada, the novel is divided into three interwoven storylines titled only “Before,” “Then,” and “Now.” In “Before,” we learn the story of Simran’s mother’s marriage in India. “Then” explores the family’s prolonged estrangement from Simran’s brother, Diwa. “Now” follow Simran’s life as an adult—her struggles with her marriage, her distant relationship with her daughter, feelings of guilt about a lost child, and her depression following her mother’s death. We travel with Simran into the depths of grief and struggle with her to emerge out the other side. While the contemporary storyline is the most developed and interesting, “Before” and “Then” serve to add depth to the characters and their histories. Basran’s writing is poetic, which often serves to add a haunting quality to the prose, but at times feels overwrought: "From the bridge I can see the on-ramps and off-ramps, the rivers and mountains—and the separation of this place and that place disappears. I realize that every road and every place and every person is just a way home." Through the story of Simran and her family, Basra illustrates the way losing a loved one shakes the foundations of a person's life, transforming her and altering all the relationships that remain.

A realistic and emotional exploration of grief.