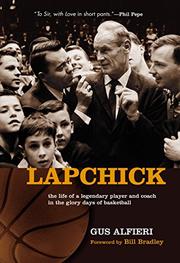 The history of basketball as seen through the life of Joe Lapchick, an original Celtic, the first coach of the New York Knicks and the longtime roundball patriarch of St. John’s University.

Alfieri, who was a point guard at St. John’s, helped win a national championship for Lapchick in 1959. His book—mostly biography, a little memoir—relates the life of a man who helped shepherd the game of basketball from the 1920s into the ’60s. He covers Lapchick’s glamorous but wearying days as center for the barnstorming Celtics in the ’20s and ’30s; his tough-but-humble approach in his first decade at St. John’s, when the Redman and Madison Square Garden became synonymous with college hoops; his struggles in the early days of the NBA, where he supported integration; and his last decade as the wise overseer of a perennial powerhouse back at St. John’s. Alfieri does a yeoman’s job in concisely presenting the 50 years of Lapchick’s storied career without succumbing to tedium and trivia. Nor does the author paint a completely rosy picture of the sport’s history as he addresses directly the exploitation of athletes, racism in sports and gambling scandals. The narrative stalls a bit when Alfieri focuses on his own experiences playing in college. But at his best, the author provides, through one pivotal figure, a clearer understanding of the issues behind the development of modern basketball, of its style of play, of its social significance and of its maneuverings to become profitable entertainment.

Lapchick respected basketball, and fans of the game will respect this warm and intelligent biography.