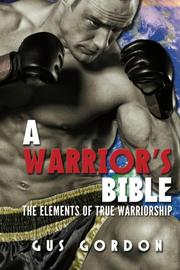 The elements of true warriorship

A philosophically wide-ranging account of the warrior’s ethos and an argument for its rejuvenation today.
Debut-author Gordon unpacks the central characteristics of the warrior with unusual comprehensiveness, focusing on a “developmental point of view” that surveys the history of the concept. This ambitious scope leads the analysis across a wide expanse of topics—a warrior’s spirituality, the warrior figure as he appears in the athletic and military arenas, and the warrior as a servant to society. The author is careful to avoid restricting his understanding of the warrior to soldiering; he considers the warrior a broader category that encompasses an elemental human type rather than a narrow occupation. The scholarly range of the analysis is striking: the likes of Yeats, Nietzsche and Schopenhauer are deftly investigated. At one point, the Navy Seals and Rainer Maria Rilke are discussed on the same page. This makes for an impressively rich multicultural perspective that includes accounts of Eastern philosophies like Zen Buddhism and Taoism. Sometimes the arguments are needlessly confused by academic jargon: “It might be helpful to reflect on the Tao yin/yang symbol, since it is the ontological foundation of the primordial domain of the feminine/masculine dynamic.” Also, it’s not always clear that the work is moving toward a unified conclusion. The “ultimate goal of the warrior is service to the world” writes Gordon, but other than somewhat vague references to social justice, it’s never entirely obvious what this service amounts to. Also, the author’s argument that the world needs a revival of the warrior spirit wants further elaboration. Nevertheless, this is a painstakingly well-researched study filled with philosophical insight.
A rigorous analysis of the history of the warrior that transcends mere military interpretations.