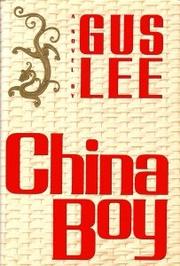 A first novel about a young Chinese boy in 1950's San Francisco who learns to box and protect himself: Lee's quasi- documentary detail and no-nonsense prose offer a vivid glimpse of Chinese-American life, while the Karate Kid plot is fleshed out enough with character and incident to be convincing. Kai Ting, the young protagonist, speaks pidgin English and has a happy childhood with his older sisters and eccentric mother—his father is a decorated war hero known as the ``Colonel''—going to the cinema, participating in family and community rituals, and attending family association banquets. The, however, this mother dies, and his father marries Edna McGurk, of stern Pennsylvania Dutch stock, who institutes abusive controls almost immediately, intending to maintain order and Americanize the children. Kai, for instance, is locked out of the house all day. When he runs home, escaping from Big Willie Mack, the neighborhood bully, his mother refuses to let him inside the house (``I didn't whistle for you''). As a result, Kai wanders about, introducing us to a variety of characters: nine-year-old Toussaint (``my guide to American boyhood''), who tells Kai, ``China, you've gotta be a street fighter''; Hector Pueblo, a Hispanic garage mechanic; and, most importantly, three retired Depression-era boxers at the YMCA. The story then records seven- year-old Kai's training, after which ``I heard better, I saw more. I was becoming more aware, my senses activated.'' At last, he ``opens hostilities'' and, in the pugilistic finale, beats up Willie Mach (Kai: ``I have the power of an oppressed minority'') and forces his stepmother to change her ways. A strong-on-its-own terms addition to the recent Chinese- American literary renaissance.