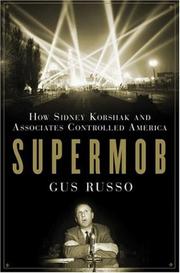 There are two kinds of power: the visible and the invisible. Those who wield the latter, writes Russo (Live by the Sword, 1998, etc.), are scarier, more pervasive and harder to bust.

Witness the “supermob,” a term coined to describe the “brilliant, amoral” circle of mostly Ashkenazi, mostly poor friends who grew up in Chicago and settled in Beverly Hills. At the Chicago end stood the “Kosher Calcutta,” a neighborhood that produced such figures as Paul Muni, Wallace Beery, William S. Paley and Jack Ruby. There Sid Korshak got his start, a young lawyer who allegedly advised Al Capone and helped forge an alliance that wedded big labor to big business to big crime to big pictures. Korshak, by Russo’s account, soon had his hands in every criminal enterprise imaginable, and he cut quite a figure as a scene-making, wheeling-and-dealing attorney who exuded a decided air of danger. Hollywood fell hard for Korshak and the supermob, which used the regular mob to its own ends; MGM head Louis Mayer’s best buddy reputedly was gangster Frank Orsatti, while Mafia money reputedly sponsored Marilyn Monroe, Frank Sinatra, even Gary Cooper. When Joe DiMaggio and Sinatra broke into the wrong apartment hoping to catch Monroe in a lesbian act, it was Korshak—“the Fixer”—who got them off the hook. When Jimmy Hoffa came to head the Teamsters Union, he “checked with Sidney on everything he did, and he still got in trouble.” Ronald Reagan followed his advice as actor and as politician, while Richard Nixon benefited handsomely from his friendship with Korshak and his close ties to the Teamsters—not least for a Beverly Hills lot bought for $35,000, “far below the listed price of $104,250.”

It won’t surprise any savvy reader to learn that politics, commerce and crime go hand in hand. Still, there are plenty of revelations in this absorbing, if overlong, book.