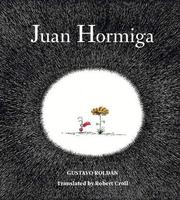 Juan, a red denizen of a colony of busy black ants, offsets his extreme indolence by enthralling his mates with picaresque tales of his grandfather’s derring-do.

Capable of 10 daily naps, Juan one day surprises everyone by appearing with “a stick between his feet with a little cloth bundle full of food.” He’s off to trace his grandfather’s paths, to “see the world” and return with “heaps of new stories to tell.” As hours pass, the ants speculate on Juan’s adventures, thereby imbuing him with increasing quantities of strength and bravery. A flash flood during Juan’s absence prompts ever greater heights of cogitation, as the ants envisage their newly crowned hero drowned. After the flood recedes, the ants decide to memorialize Juan by planting a flower at the base of a large willow tree. En route, a passing mosquito reports that Juan is actually asleep in that very tree, high up in a knothole. Indeed, the champion napper has slept through the flood, bedding down at the first hint of heavy clouds. Juan cleverly assuages the ants’ disappointment, springing down to share the bundle of food he’d packed while regaling them—yet again— with his grandfather’s escape from an eagle’s talons. Charmingly ant-ic black line drawings, accented with red, green, and yellow, pop against expansive white space. Dialogue is keyed in red type, enhancing the handsome overall design.

Roldán celebrates the social currency of cracking-good storytelling—and the expediency of a well-placed nap.