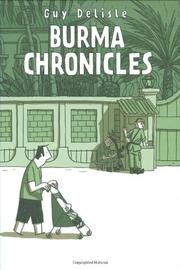 Insightful, illuminating memoir of a year under a totalitarian regime.

In 2005-06, Delisle (Shenzhen: A Travelogue from China, 2006, etc.) accompanied his wife, who works as an administrator for Doctors Without Borders, to the country recognized by the United Nations as Myanmar. The United States and other democratic countries, however, still call it Burma, refusing to recognize the legitimacy of the military junta that seized power in 1989. As in the illustrator’s previous adventures in China and North Korea (Pyongyang, 2005), the focus is less on politics and more on the lives of the people he encounters—though such lives are profoundly shaped by politics. He comes to accept checkpoints and censorship as routine, and he does his best to find a suitable home, survive with intermittent electricity and Internet access and take care of his toddler son Louis, whose charm transcends cultural borders. The author also fears malaria, bird flu and poisonous snakes, though the DWB medical community provides more comfort than much of the Burmese citizenry enjoys. Delisle writes and illustrates a children’s booklet on HIV, an important contribution to a country in which heroin and prostitution are rampant. As in previous volumes, his eye for everyday detail combined with droll, matter-of-fact narration humanizes his 14-month experience in a country that might seem traumatic, even intolerable, in other hands. “There were no demands and no uprisings either,” he writes. “Things are always very calm here, thanks to a regime that creates paralysis by fomenting fear on a daily basis.” The undercurrents of Buddhism throughout the book culminate in his visit to a temple, where his meditation proves transformative.

Though classified as a graphic novelist, Delisle has claimed territory all his own as a graphic-travel memoirist.