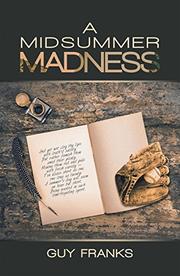 In his debut novel, Franks tells the story of a Shakespeare-loving baseball coach wrangling a cast of dramatic players.

In 1986 Connecticut, Shakespeare Louis “Shake” Glover—named for the playwright as well as for baseball legend Lou Gehrig—is the manager of the New Britain Kingsmen, a Double-A baseball team that’s dominated the Eastern League for the past few years: “the Kingsmen were well-coached and full of talent and did one thing consistently—win.” Shake brings his love of the Bard of Avon to the team, as well: He frequently quotes Shakespeare’s work, and an announcer reads passages from even the more obscure plays over the stadium’s public-address system. In fact, many of the club’s members bear striking similarities to Shakespeare’s characters. There’s second basemen Dane Hamilton, a melancholic figure with a “brow knit in perpetual worry”; outfielder Hank Prince, a wayward, would-be star whose play is hindered by his tendency to hang around unsavory characters; and Rex Lyon, the aged baseball club owner with an estranged daughter and questionable mental acuity. As the season progresses, Shake and his Kingsmen meet with all manner of mishaps and unexpected turns—some tragic, some comic, and all of them thoroughly Shakespearean. Franks’ prose is allusive and literary, as one might expect given the overall premise. The dialogue mixes moments of high and low humor, as in this exchange between Shake and his clubhouse manager, Speed. “Speed: Make a what? / Shake: A compilation CD, with everyone’s music on it. / Speed: A copulation seedy?…You have to do your own copulating.” Overall, though, the novel fits comfortably within the genre of band-of-clashing-temperaments baseball narratives; as in many such novels, the meandering plot is forgivable because the personalities are so strong. With its relatively low stakes and light touches, it would make for a good summer-reading experience—not dissimilar to passing the time watching a minor league baseball game. If one’s a fan of Shakespeare, all the better.

A leisurely baseball novel with a heavy dose of the Bard.