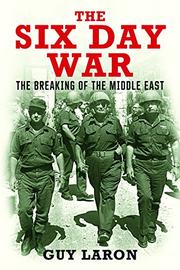 The Breaking of the Middle East

A penetrating study of a conflict that, although brief, helped establish a Middle Eastern template that is operational today.

According to Laron (International Affairs/Hebrew Univ. of Jerusalem; Origins of the Suez Crisis: Postwar Development Diplomacy and the Struggle over Third World Industrialization, 1945-1956, 2013), the Six-Day War of June 1967 was fairly well settled within hours of its onset. The Israeli air force wiped out the entire air fleet of Egypt, Jordan, Syria, and Iraq within the first few hours and then, over less than a week, Israel’s army pushed the nation’s borders further out. The war had massive repercussions, shifting power away from Egypt to Palestine and Jordan, and it quickened the rise of Islamist and Baathist forces alike, to say nothing of many local sectarian militias. On the Arab side, the Baathist military wanted border conflicts, if not outright war, with Israel primarily to “wrongfoot Nasser,” as Laron writes of the Egyptian dictator. Internationally, both the United States and the Soviet Union took great interest in a war that by some respects was between them by proxy. The author looks beyond Cold War maneuvering to examine the conflict in other lights, including the economic: none of the nations of the region was doing well, and indeed, as he notes, in January 1967, Egypt had defaulted on loans from the International Monetary Fund. In Israel, too, there was internal tension among factions led by David Ben-Gurion and his rivals, the former of whom had considered the earlier borders as “unbearable” but perhaps was not entirely prepared for the vastly expanded territory. Though readers are left to read between some of the lines, Laron connects many of those events to current trends and developments, including Israel’s “cult of the offensive,” by which Israeli forces strike hard and decisively—and often first, even as the Israeli military “remains the most powerful institution in Israeli society.”

Primarily of scholarly interest, though readers with an interest in Middle Eastern geopolitics will find much of value.