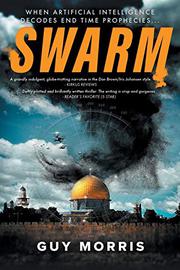 A computer security expert learns from an amazing secret ally that biblical end times prophecies are coming true as Chinese, Russian, and American sins edge the world toward war.

Debut author Morris spins a global conspiracy cyberthriller with threads drawn from both well-worn sources (the book of Revelation) and breaking news out of Washington, D.C. In 1995, hacker prodigy Cary Nolan, having meddled with the sinister secret-society affairs of New World Order elite Andre Strauss, is targeted for death. Strauss mistakenly kills not only Nolan’s lover, Bianca Troon, but also his best friend and computer partner, Derek Taylor, while Taylor and Bianca are in post-coital bliss together. Shattered, Nolan switches identities with Taylor and, 26 years later, perpetuates the ruse as a maverick tech-security contractor to the National Security Agency. Know that this is an alt-2021 in which a controversial, reckless, Russia-manipulated, power-mad president—Donald Trump is never mentioned but there’s no doubt who the “stable genius” is—has been reelected. He lusts for a third term amid a post-pandemic recession and international chaos. As events unfurl against a devastating Chinese computer-virus attack (and Strauss’ machinations), Taylor/Nolan is investigated by beautiful Navy Lt. Jennifer Scott for his ties to rogue hackers. He goes on the run with the attractive enemy. Among the secrets he keeps from Jenn: His partner in the hacker underground is not human but a top-secret, escaped, sentient software program called SLVIA. SLVIA lately has been bombarding Taylor/Nolan with Scripture, reasoning that the Bible end times verses compute as accurate and are coming to pass as allegories of geopolitical upheaval and corruption. Verily, it is easier for a camel to go through the eye of a needle than to count all the Bible prophecy/apocalypse novels out there. But Morris’ specimen stands out for not being conservative-megachurch recruiting material (instead blasting the alt-right Trump GOP and QAnon believers something fierce) and for coordinating a grandly indulgent, globe-trotting narrative in the Dan Brown/Iris Johansen style. The novel brims with wild characters, exotic settings, a skillful embroidering of CNN headlines, and mind-blowing concepts, into which the religious stuff fits snugly. Readers may heed the spiritual messages (if any) or just go along for the ride. It does seem a little unfair to poor Trump, though. Without his insane reign, this story wouldn’t feel half as terrifyingly plausible.