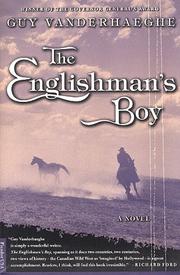 An ambitious novel, set along the US-Canadian border and in Hollywood, that won for its author (Homesick, 1990, etc.) Canada's prestigious Governor General's Award. The story consists of parallel narratives, the first taking place in 1873 when a band of ``wolfers'' (wolf-hunters) camped in the northern Montana Territory lose their horses to a furtive Indian raiding party. A determined posse pursues the thieves northward into Saskatchewan, where a terrible vengeance is exacted. Among those avengers are the mysterious title character, a stoical drifter who will become both the victim and nemesis of the men with whom he has cast his lot, and Shorty McAdoo, a Scotsman who will forever after be burdened by his failure to act as the ``civilized man'' he believed he was. The second narrative, set in 1923, recounts in his own words the ordeal undergone by Harry Vincent, a crippled journalist employed by playboy moviemaker Damon Ira Chance, a self-described ``visionary'' who longs to film an ``epic western'' incarnating his conviction that ``the spirit of the age would express itself in an endless train of images.'' Harry seeks out Shorty McAdoo's story, not realizing that Chance will betray his ostensible vision, and that he will also unknowingly betray the aged, guilt-ridden McAdoo. The two stories intersect in a melodramatic climax that, unfortunately, drains the novel of much of the integrity given it by Vanderhaeghe's sharply imagined confrontation scenes and salty dialogue. The novel has a lot on its mind, and few readers will leave it unfinished, but there's a paradoxical problem at its core: As gripping as the manhunt story is, its characters remain frustratingly opaque (even the haunting figure of the Englishman's boy only awkwardly inhabits the narrative); and, despite Vanderhaeghe's persuasive characterization of the appealing Harry, the story he's part of feels inchoate and derivative. Two good half-novels here, but they don't come together as a whole. (Author tour)