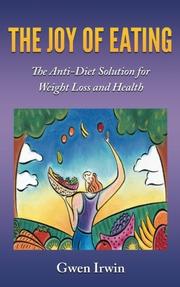 THE JOY OF EATING

When her mother died, Irwin was devastated. She was also mortified that old friends would see her at the funeral because she had “gained so much weight.” Trapped in a cycle of yo-yo dieting that had begun when she was in junior high, Irwin was a size 22 by the time she was in her 40s. Miserable, she constantly berated herself while agonizing over calories and eating prepackaged diet industry food. Then one day Irwin decided to stop dieting and love herself at any weight, eating without guilt or shame. A big believer in the “law of attraction,” where thoughts create reality, she began thinking positively about herself. Retraining her mind to view food as pleasurable nourishment, she started eating nutrient-dense items—including leafy green vegetables and fruits. And if she wanted a piece of cake—well, she just went ahead and devoured it. The pounds began coming off naturally, and as time passed, Irwin’s once overweight body became fit. This dramatic and familiar life story quickly turns into an upbeat motivational speech for stressed-out dieters, as Irwin divulges her no-frills secret for healthy weight loss—eat good food and feel great about it. While this common-sense approach isn’t new, diet-disgusted readers who don’t mind a curse word or two may be able to relate to Irwin’s friendly, plainspoken voice, as when she describes dysfunctional labels people often place on food: “How about this classic attitude, ‘Fuck it, I’ve been so bad this week I think I’ll just eat the rest of this box of cookies’?” Some of the author’s inspirational thoughts are memorable: she compares the negative voice in her head to a bully who shouldn’t be tolerated. Light on diet jargon and health-related facts (the author mentions that 68.5 percent of U.S. adults are overweight, but she doesn't cite sources), this thin, fast-paced work can be read in a couple of hours.

A realistic, motivating conversation about weight loss for those who have tried everything else and failed.