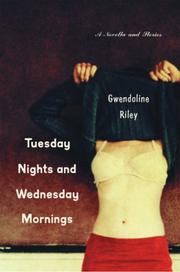 A Novella and Stories

British author Riley (the debut novel Cold Water, not reviewed) isn’t one for a happy tale, or even a mildly heartwarming tale. That’s not to say she’s out to shock and offend with brutal violence or sickening depravity, but rather to scratch her way around and inside the lives of characters, primarily in Manchester and afflicted with a coruscating malaise. Sounds grim, to be sure, but the stories here are actually quite lively for all their mopiness. Most of this first collection is taken up by the novella “Sick Notes,” narrated by one Esther, a young bookworm just back in town from a sojourn in America, where she may or may not have been going to school (not the most reliable narrator, you see). Back in Manchester—a rain-soaked place of dank flats and grimy pubs—Esther moves right back in with Donna, the two of them a tough team functioning outwardly like twins, sharing the same books and habits, and holding the world in the same cool, ironic disdain. Since Esther is the narrator, however, we’re privy to the corrosive uncertainty and emotional blankness that roils within her, resulting in an outer image of quirky haughtiness and spiky indifference, yet an inner world of self-mutilation and anorexia. Riley doesn’t cheapen Esther’s turmoil by giving us an easy reason for her state of mind. She is as she is, no more certain of why than the reader: “Who knows what I’m playing? Debonair self-sabotage I wish.” The handful of stories that bulk out the collection at the end are a grab bag of similar tales in similar settings (sad girls in sad cities), and, while Riley keeps them short and sour in a rapid-fire assemblage of misery, they can’t help but seem like shadows or afterimages of the novella, itself a mini-masterpiece about dwindling hopes and the near-impossibility of opening oneself to the world after a lifetime of locked doors.

Like listening to the entire Smiths and Jesus and Mary Chan discography in one go.