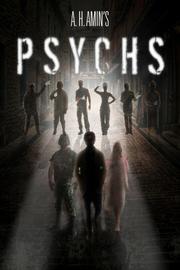 In the first of Amin’s Psychs series, a team of ghosts help a crime-fighting psychiatrist foil an international arms deal.

Hassan had always felt like someone was watching him. Then, as a teenager, several ghosts appear. They beg him to help a woman struggling with her abuser. Hassan went to help but ended up in the hospital with severe injuries. As he healed, he also made peace with his ghosts—seven former American soldiers and his mother—and came to understand that they’re his paranormal guardians. Through the years, the ghosts and Hassan form a highly trained, supernatural mercenary team that thwarts bank robberies and murders. Elsewhere, Adam, a Navy Seal whose unit was captured after his Seal commander went rogue to become a weapons dealer, endures years of torture. Now that he’s escaped, he seeks to avenge his comrades by going after his old commander. He and Hassan team up to stop the arms deal. Amin, a screenwriter, includes fantastic, sometimes gory action sequences fit for film. As it skips through time to explain Hassan’s discovery of and training with the ghosts and Adam’s years in confinement, the narrative shifts from Hassan’s first-person narration to third-person accounts from several characters, including Hassan. Jumping around in the flashbacks can be somewhat jarring, but it’s used effectively enough to allow readers to fully understand the history and motives driving Hassan and Adam. Unfortunately, the text is rife with misspellings, grammatical errors and punctuation mistakes, slowing down an otherwise fast-paced thriller.

A rough-hewn, action-packed tale of beyond-the-grave good vs. evil.