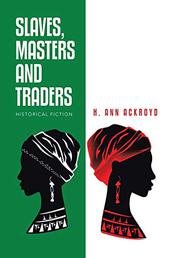 Human bondage connects the lives of people on three continents in this sprawling saga of trans-Atlantic enslavement.

Ackroyd’s historical novel examines slavery in 1800 from the perspectives of dozens of perpetrators and victims. One plotline involves wealthy Scottish financiers of the slavery trade, including Aaron Migu, a businessman who outfits the schooner The Spirit of the Clyde; Stanley Staymann, a young nobleman with fantasies of owning enslaved people in America; and guilt-stricken George McCallum, who uses profits from selling human beings to support an abolitionist writer. A second thread follows inhabitants of Banyan Village on the West African coast, including 5-year-old Abebi; her mother, Efia; and her father, Thimba, a superlative hunter and closeted gay man. Europe and Africa collide on the Louisiana plantation of “the chevalier,” an aging patriarch who prefers André, his enslaved son by a concubine, to his other son and heir, Jacques; the latter conspires with his mother to poison the chevalier and humble André. The three narrative threads come together when the Banyan villagers are kidnapped and shipped on the Spirit to New Orleans for auction just as Stanley arrives to take control of the chevalier’s plantation. Ackroyd’s panorama steeps readers in dense, colorful historical detail. There are a few anachronistic notions, though, as when an ethnomusicologist solicits “slave input on how to decorate the chapel using African motifs and crafts within a Christian framework.” The author pens gripping scenes of the horrors of the Middle Passage and the plantation’s cane fields, but her focus is also sociological, addressing Scotland’s class hierarchy as it confronts newfangled ideas about human rights; the intricacies of West African religion; and queasy contradictions of plantation society. Ackroyd’s prose sometimes feels didactic (“He now understands the word libertarianism….It means ‘rejecting institutional authority and replacing it with trust in individual judgment’ ”), but she often achieves lyricism that illuminates characters’ lives: “The hunters, knowing life is mere clothing for a spirit that never dies, give thanks to Gran Legbwa in a wild dance and song.”

An engrossing re-creation of the world of slavery, rich in social detail and psychological nuance.