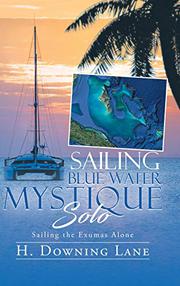 Retired educator Lane’s account of 51 days of sailing to the Exuma Bahamas and back explores the wonder and flow of solitude.

After difficult breakups, many people have considered taking a trip on a sailboat and not returning for a good, long time. In this debut book, Lane tells of how he did exactly that by leaving Key Biscayne, Florida, to sail to the Great Exuma Bahamas on a 40-foot catamaran named Mystique. When he arrived at the islands, he disembarked and stayed there alone for two months before sailing back to Florida. The concept of being alone in nature is the primary thrust of the book; his aloneness, he says, allowed him to personify objects, clouds, and even ideas. As a result, readers may find it a relief when other humans, such as his son, stepfather, or mother show up, even in his memories. And as much as Lane may crave solitude, some readers will find it difficult to relate to the more ethereal relationships that he recounts in these pages. The author structures each chapter around sayings, lyrics, or anecdotes, and as a result, the organization of the book feels as uneven as ocean waves. There are lists of various things that “flow,” lists of goals, book reviews, and discussions of laws of energy and relativity. However, these seaborne considerations may not be as transformative for the reader as they are for Lane. For instance, he says that a brilliant sunrise appeared and a porpoise escorted him as he departed Miami, and he invests this occurrence with great meaning: “I expected miracles so they appeared wherever I sailed,” he says. Overall, this is not a book for people seeking a grounded narrative, as it floats from shore to shore and idea to idea. However, some may consider this heady boat trip to be a soothing journey.

A scattered set of ruminations that may make some readers feel lost at sea.

SAILING WITH RHYME AND REASON
by Robert E. Jack
Nonfiction