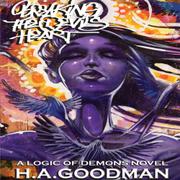 A Logic of Demons Novel

Celestial gumshoes search for the source of evil in this knotty supernatural allegory.

Recently deceased ex–CIA agent Stewart Willoughby is an Observer, an almost-angel who uses rough tactics in the fight against demonic adversaries. He gets a break when he recruits a new informant, a senior executive at the Company—aka hell—who’s willing to give him information on “The Formula” that demons use to goad humans into sin. (The impish fiends are forever whispering malevolent hints into people’s ears, sometimes in person and sometimes over the phone from infernal call centers.) With his fetching partner and former fiancée, Layla, Stewart embarks on an extended investigation into the nature and causes of evil, from garden-variety manslaughters to horrific genocides. Their sleuthing takes them to some of history’s grisliest crime scenes—and eventually starts to eat away at their souls, as they resort to methods that are uncomfortably similar to the brutalities they want to eradicate. In this installment of his Logic of Demons series, Goodman continues fleshing out his inventive vision of the afterlife as an edgy, inglorious, down-to-earth place, where heaven itself is divided between hostile liberal and fundamentalist factions, and no one is sure that an always-absent God even exists. The devils, as usual, get the best lines; Goodman’s portrait of hell as a dreary corporate bureaucracy is a satiric gem—the chief torments are pointless routine, office gossip and nasty performance evaluations. The novel drags, though, when it focuses on Stewart and Layla’s relationship, which stays blissfully bland even after it takes a satanic turn. But Goodman also probes meaty philosophical themes with sophistication, as his characters wrestle with the problem of evil and the blurry line separating right from wrong. Subversively, he suggests that evil may not be a demonic plot but just another name for human nature. Goodman’s allegorical symbology isn’t too intricate—a farm boy Stewart encounters turns out to be the quite literal embodiment of Time and Chance—and at times the novel’s intellectual debates feel like an undergraduate seminar. Still, Goodman’s cross between a detective novel and The Screwtape Letters makes for a stimulating read.