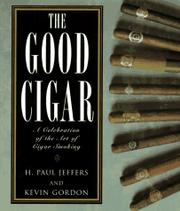 A Celebration of the Art of Cigar Smoking

Here's a guidebook for the new generation of affluent stogie enthusiasts. A vile habit to many, a delight to a happy few, cigars are increasingly alight. Misogynist or, lately, simply antisocial, smokers placidly ignore the fulmination of the cigar police for the inexplicable pleasure of wreathing themselves and any innocent bystanders in a stinky haze. Writer Jeffers (Gentleman Gerald, 1995, etc.) and artist Gordon offer acolyte puffers a cigar manual a notch or two above the usual. Along with a history of the habit and a description of the cultivation and manufacture of the thing, the authors provide a guide to all the arcana and etiquette, personages and purveyors, terminology, doggerel, and epigrams of cigar smoking. (One apt epigram they omit: ``Tobacco is the opiate of the gentleman, the religion of the rich,'' said Cabrera Infante in his matchless Holy Smoke). Particular homage is paid to the great promoter Zino Davidoff—which seems altogether appropriate; parts of the text are reminiscent of Davidoff's The Connoisseur's Book of the Cigar. It's all easy and good-natured. There are no complaints about the insane inflation of cigar prices spurred by the new Baby Boomer demand. No stand is taken against the barbaric habit of leaving the band on a cigar as it is smoked. (But even Davidoff, alas, equivocated on this important point.) The authors may be forgiven for stretching a simile here and there. ``The first time you smoke a cigar,'' they say, ``it is like the first time you have sex.'' They neglect to point out that one of those firsts is more likely to induce nausea than the other. For cigar zealots, old and new, here's another accoutrement to place beside the humidor and the clipper. (illustrations and cigar ratings, not seen)