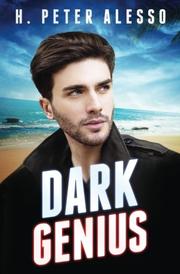 A former theoretical physics prodigy battles an MIT rival and the dark web in this thriller.

Andrew Lawrence has been through the mill. He was once a child prodigy at MIT, but when his gifted sister committed suicide and his family imploded, young Andrew suffered a breakdown. Years later, he returns to MIT in a postdoctoral position, wanting nothing more than to devote himself to his “love of discovery, of pure science, of research for its own sake.” Unfortunately his old rival, professor Stanley Prost, is in charge of the Center for Theoretical Physics and will go out of his way to make sure Andrew is made to feel undermined and unwelcome. When a trip to CERN ends with an unknown hacker stealing data from the server—information that Andrew needs to prove his latest work in “Extended Supergravity Grand Unification Theory”—he becomes the FBI’s prime suspect. Together with his Ph.D. candidate girlfriend, Emma Franklin, and fellow supersymmetry enthusiast Eugene Weyl, Andrew will have to journey deep into the dark web in order to prove his innocence once and for all. At one point, Andrew tells his cohorts: “We need to find out what we’re dealing with and how to defend ourselves. The problem is that the hackers are unknown and far away. We have to learn more about them and lure them into an exposed position.” Newcomers to the dense world of theoretical physics will undoubtedly struggle with a novel that does little to make its painstaking research palatable to the layperson. Where dialogue isn’t excessively formal or pure exposition, it is largely an exchange of impenetrable jargon. Despite a valiant attempt to make the machinations of competing researchers feel intriguing, the stakes of the thriller remain nebulous. Thankfully, the pace is brisk enough to keep the plot moving, especially when Alesso’s (Captain Hawkins, 2016, etc.) ambitious series opener takes a hard left down the dark alley of international cybercrime. But the characterization is thin; the action elements are underwritten; and the final plot twist feels less like a surprise than a simple confirmation of readers’ earliest suspicions. These issues, coupled with the relatively short length, give the impression of a well-structured but early draft of a much more compelling novel.