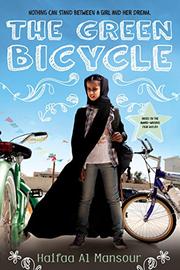 Curious, creative, and strong-willed Wadjda stages small acts of rebellion at her girls' school in Riyadh.

Eleven-year-old Wadjda isn't supposed to wear Chuck Taylor sneakers to school or sell bracelets and candy to her fellow students for extra cash. But money is tight at home, and Wadjda has always preferred to emulate tough, mischievous older girls like Fatin and Fatima rather than her pious, rule-abiding classmates. Wadjda particularly envies the freedom her childhood friend Abdullah has to roam the city on his bicycle; for Wadjda to ride a bike as a girl would not only look unseemly, but could also, as her mother explains with characteristic frankness and fear, "harm your virginity." Nevertheless, when Wadjda sees a perfect green bicycle at a toy shop, she is determined to save 800 riyals to make it hers. Wadjda's mother's struggles—a long, perilous commute to the only job she can find; Wadjda's father's search for a new wife—are juxtaposed effectively against Wadjda's own, and her alternating frustration with and compassion for her daughter's actions are palpable. Despite the restrictive environment and many setbacks, Wadjda's cleverness and determination keep the mood relatively hopeful. The author, a screenwriter, bases the novel on her first feature-length film, Wadjda.

A winningly told story of struggle, solidarity, and optimism.