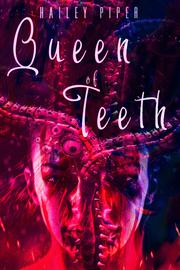 The intersection of two women falling in love, a newly born entity, and a corrupt big pharma company set the stage for this horror story.

Decades ago, AlphaBeta Pharmaceutical unleashed a virus on the world that affected thousands. The children of those infected are chimera—they contain the DNA of two or more individuals—and they’re closely monitored by the corporation during mandatory monthly checkups. So when chimera Yolanda “Yaya” Betancourt wakes up one day after a sex romp with a woman named Docia “Doc” Hall, an AlphaBeta Pharmaceutical agent, and discovers teeth between her thighs, she thinks the vagina dentata is nothing to worry about and probably related to her medical history. But the teeth are only the start; they’re followed by horns and tentacles that spring out of Yaya’s vagina in a slow metamorphosis that turns her into something else altogether, something that shares a mind with an inner being called Magenta whose cravings for peanut butter (and other forms of protein) take Yaya to strange places. Meanwhile, Doc experiences a transformation of her own. Her encounters with Yaya (and Magenta) lead her to complete the journey whose early beginnings date back to years before, when a tragic encounter with a different chimera led to a bad ending. But when ABP discovers Magenta’s existence, they will stop at nothing to take possession of Yaya and Magenta—and Doc stands in the middle. Piper’s evocative novel is an intoxicating mix of graphic body horror and lesbian romance. Painful questions regarding corporate accountability, personal redemption and forgiveness, mental health, and the nature of love revolve around the novel’s three fascinating main characters, Yaya, Doc, and Magenta. The elusive worldbuilding—When is the story set exactly? Is it on an alternate Earth in an alternate timeline?—serves the story well, heightening its menacing tone.