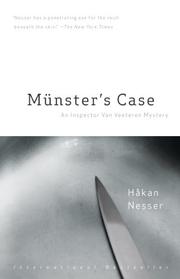 Throughout his first five appearances translated into English (The Inspector and Silence, 2011, etc.), Chief Inspector Van Veeteren has constantly threatened to retire, but this time he seems to mean it, leaving the scant detecting honors here to Inspector Münster.

Waldemar Leverkuhn’s lucky day, which begins when he splits a lottery prize of 20,000 guilders with three old friends, ends when he’s stabbed 28 times as he sleeps off his drunken celebration. That same night, fellow winner Felix Bonger goes missing from his houseboat, and shortly thereafter so does Else Van Eck, the wife of the caretaker in Leverkuhn’s building. The Leverkuhn children are no help in Münster’s investigation. The eldest daughter, Irene, has been a patient in a mental hospital for years, and her lesbian sister Ruth and weak-kneed brother Mauritz haven’t remained close enough to their parents to offer any helpful information. The biggest break in the case comes when Leverkuhn’s wife, Marie-Louise, who’s been acting more shocked than grief-stricken, suddenly confesses to his murder and—this being an unspecified fictional country that combines features of Sweden, Finland and Holland, but certainly not the U.S.—is promptly put on trial. From beginning to end, in fact, the case is driven not by any discoveries the police make but by developments outside their control.

Münster, who feels very much like a stopgap sleuth, cuts an even less assuming figure than Van Veeteren, who pops up as a kind of Greek chorus from time to time to remind you that it’s his franchise. The mystery, like the detection, manages to be both routine and gripping.